My last race was the Ryton Pools 5 in May. Not one of life’s running elite, it was pretty slow which I blamed on an existing liver condition. Little did I know I had an ovarian cancer brewing nicely.

A hysterectomy and 20 weeks of chemotherapy have followed but that wonderful day has arrived when I can put on my (new) running shoes and head out again.

Sensibly I thought the Monday speed sessions and Wednesday tempo runs might be a bit of a stretch first off, so I took all advice and thought I would whistle through the 0 – 3 mile Challenge plan before venturing out with the club.

Day 1 saw me at the cycle track at Tudor Grange – run one minute walk one minute x 10. How hard could it be! Hard. I started to time my walks so they coincided with the hill. As it was just after Tudor Grange fireworks, every workman in Solihull was out collecting litter. I decided to impress them with a sprint along the straight for my final minute. I managed 30 seconds and made for my car wheezing and limping along the way.

Round 2. Run two minutes walk five minutes x 6. But you know, I’m a runner. I’ll do run two minutes, walk two minutes. At least I was on the road and felt better running but my lungs screamed and the next day I was so stiff it was as if I had never exercised before.

Round 3 was on the track. Under the steady eye of Richard Wassall I went four times around the track with a two-minute walk in between. I managed the incredible speed of 3 minutes and 4 seconds, a whole minute and 15 seconds slower than my running mates Sue Wassall and Jackie Paterson, but hey, I was on the outside lane! And it was great to be running with (near) them again!

Parkrun beckoned. I wasn’t foolish enough to think I could run it all but I thought a walk / run plan of three minutes each would do it. I knew I was beaten when I was overtaken by Margaret and her dog. And I couldn’t catch them up! The Mount Everest of a climb by the playground finally saw me off and I managed just 2.2 miles.

It was time to re look at the plan. And I realised I hadn’t been following the plan at all – I had bastardised every session in some way and had made myself ache and feel disheartened in the process.

So my last two sessions have been by the book, with proper recovery times and rest days. I am starting to go a little quicker and further, and on Friday, joined the Improvers for a part of their session.

It is fantastic to be back. Don’t expect to see me on Mondays or Wednesdays any time soon, and my target of December’s Centurion has gone out of the window, but I am getting there slowly, just more slowly than planned! 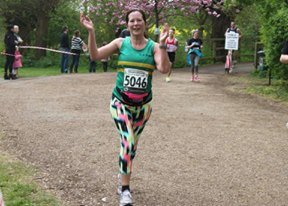