A magnificent representation of the club by 26 runners in the green & gold at our local big city run. The results speak for themselves. See the full listing on the Results Page.

Often we highlight the faster boys and girls but I must point out very gritty runs by Ann S-D and Kate V from Tracy’s gang in what were tricky conditions – a crowded course, a warm, sultry morning for the time of year and a strong headwind going out. 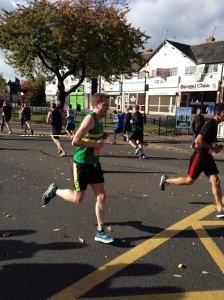 Above all I single out Kerry W for her PB of 01:57:49 smashing the 2 hour barrier at last. I ran with her last year and we missed out by 71 secs. She was gutted then but it was all part of a work in progress and the roller coaster that running brings. Instead of letting it get to her for more than a short while, she knew that she had to knuckle down and work harder. I have seen her out and about running alone in recent months putting in the miles – and how it has paid off! Above all we all know that there are no short cuts in running – you get back what you put in; if you pardon the clichés. I saw her minutes after she had finished and her face was a joy to behold compared to 12 months ago.

Personal thoughts – I did the first in 2008 from Alexander Stadium when the start was delayed in the rain by half an hour. Will this be my last one? I don’t really enjoy it. It’s like a Marmite Run – but that would be a misnomer because many people like Marmite! I don’t know anyone who thinks that it is a great run. One of our ladies commented on Facebook “Last 3 miles hideous!” 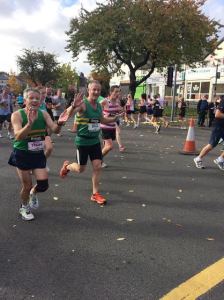 The organisation has been much slicker since BUPA took over after the 2010 disaster (when hundreds of runners at the finish couldn’t cross the line for their  finishing times because of the congestion). Entry will be £35 next year so it’s not cheap (x say 21,000 runners = £735,000 gross; not a bad return for BUPA! Mind you 20% of that is VAT so not bad for HMR&C as well). They are now promoting a new 10K on the 3rd May for £35 – enter both next year and get £10 off.

For 2 years running,  BUPA have placed me in the wrong start wave. This year instead of going in on Saturday to change my colour number I just covered it up and walked into the orange pen without a problem. 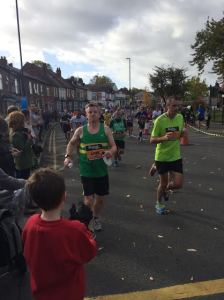 There’s something about the course that I just don’t like but I can’t put my finger on it. I’ll come to the hill in a moment but, for example, as you are running out of city along Pershore Road  you are just settling into a rhythm, when  at mile 4 we all have to veer to the right off the main road in Selly Park and run along two sides of an extra-long  triangle,  first uphill with speed bumps and then downhill  back to the Pershore Road. (That was added I think to make up for tinkering with the course in Edgbaston when BUPA took over). Whatever – I do not like that bit at all.

It’s a relief to reach Cannon Hill Park; but we seem to get through there in 10 minutes and it’s back to the grindstone again!

Then “the hill” at mile 10.5 – it follows a miserable part of the route as you emerge climbing a gradual incline up from the long Middleway concrete underpass – with “the hill” still to come. Personally I have got used to it now and am ready for it as it seems little different to tackling Knowle Wood Road – but I know that lots of runners hate it especially when you’re really tired.

Oh finally by the way, it’s a not a half marathon but further according to my Garmin.

Will I be there next year? No idea but knowing me and knee permitting??? 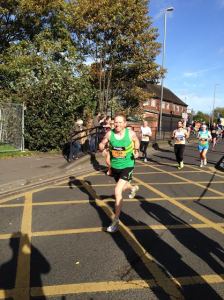 p.s. Andrew Connors had a day to remember. He was captured on Twitter crossing the finishing line by local DJ Phil Upton and also got a name check from Dave Moorcroft as part of the TV commentary!