After a short flight, bus ride and then 3hrs on a coach we arrived in Fort William the night before registration. Its fair to say that on the coach to this location, although the scenery was stunning it was also a severe reality check. Ben Nevis was suddenly in sight and the appeal to run, walk or crawl the 42 mile course was starting to fade. 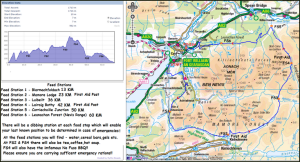 Once we had settled in, Tim, Phil and I studied the O/S map and calculated the ascents, descents and individually I know we all set our own personal targets. Having never completed distances further than a marathon before, my approach was to purely get from check point to check point, this really helped me break down the mileage we were about to cover.

So with our preparation complete, we made a command decision to use the bag drop at check point 3, this allowed us to drop hiking poles to use from Mile 20 – 26 for the toughest climbs of the course.

So Friday night was our carb loading meal, after filling up with lots of spaghetti bolognese, garlic bread and cheese we were fed and watered and all set for our 04:30am start Saturday. 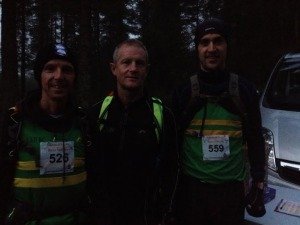 We arrived at the start by taxi to be greeted by only a small number of runners, Braveheart car park was damp, cold, dark and head torches were needed whilst we awaited the rest of the field to arrive.

Promoting Team K&D as you would expect, we mingled with the other runners and it was clear that most seemed to be really serious Ultra Runners and this distance was merely a normal run. However, like all these things, that should never put anyone of an event, we all run our own race and that was my mindset. 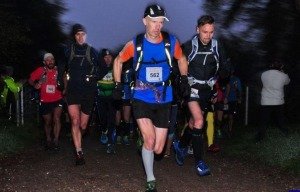 So as dawn broke, the safety motorbikes / quads appeared and before we knew it we were off. This was it, a day of running and the challenge for me to finish in under the cut off of 12hrs.

I set off and quickly I latched onto some runners from a local running club, they had ran most of this route previously and they gave me some great advice to walk the hills and make up time on the flat (This was clearly my plan all along) 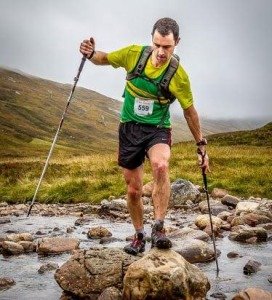 I pushed through the next check points and the climbs from mile 20 – 26 were tough, I remember climbing with my poles and pushing as hard as I could, sweat pouring from my fore head and when I checked my garmin I was doing 22 min miles..(How can that be I thought) but I dug in, looked down and just pushed as if my life depended upon it. 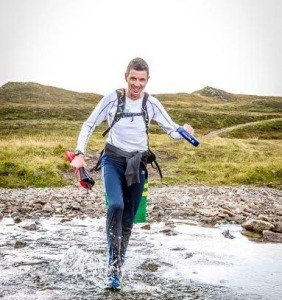 Finally, after 6hrs of running, in the distance I could see the marathon marker (Mile 26 was fantastic and I could smell the BBQ) unless you were like Tim who ran through this point that fast the coals weren’t even warm. By the time I arrived here it was in full flow, and I can honestly say I have never enjoyed a Burger / Cup of tea more. After 5 -10 mins here I was off for the last 16 miles. 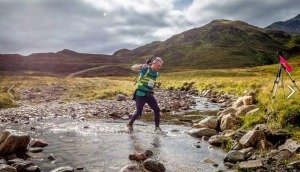 This is where my first wobble started to happen, at mile 32 and after enduring a river crossing, endless streams, and hours of running on rocky paths my hot spots turned to blisters. Within a few miles my blisters had burst and even the compeed wouldn’t work.

I was in serious pain by Mile 35 and all the mental preparation I had done so far was working, but I hadn’t prepared myself for the fact that blisters could prevent me from finishing.

There was a fair bit of internal motivation, swearing happening at this stage, how could I possibly come to Ben Nevis, complete 35 miles and drop out with blisters. I told myself this isn’t happening, to man up and soldier on…I utilised my poles, got my head down and force marched as fast as I could..

Suddenly I hit a metal road and knew the finish had to be near, as I turned a corner I noticed the final dibbing station and the end, 200m would take me to the end of my Ultra journey… I walked a further 100m into the distillery to get food and drinks when i noticed my K&D Colleagues, I’ve never been so pleased to see two beaming friendly faces..After a few words, a hand shake, this was it ( The man hugs) if you can’t have a man hug after 42 miles, when can you…My finishing time was 10hrs 45mins… 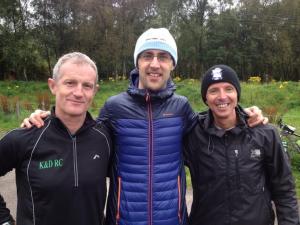 Its fair to say on a personal note,the achievement regardless of the time it took was immense, the start, the course and the finish was a rainbow of emotions, some good some bad, but the end result being I am now an Ultra Runner…….

So, the Million dollar question you are probably asking, would I do it again?

Absolutely, but only if my K&D Colleagues joined me!!!!!

Tempo Running Girls on the run – trail race No 1!
Scroll to top