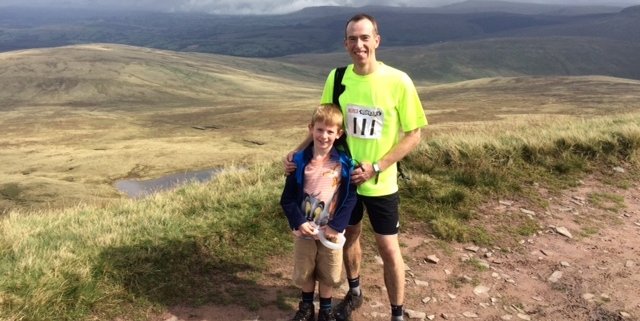 Paul Baker recently ran the 56 Mile / 89 Km Clif 10 Peaks Ultra through the beautiful Brecon Beacons. He took time from his recovery to provide us with a fantastic write-up; including a Disney-esque Father, Son moment… A must read for anyone with an adventurous spirit and a little bit of crazy.

About half way up the first climb of the day I took a look behind me back down the hill to see a chain of head torch lights stretching back into the darkness. Not only did it look pretty impressive but more importantly it gave me an excuse for taking a break from the slog up the rain sodden slope that we’d been doing for the last half hour.

The long course Clif 10 peaks race started at 5am from the Youth Hostel at the head of Tal-Y-Bont reservoir. It had been tipping down since the previous evening turning the camping field into a quagmire but it was due to stop at about 7am, we hoped. There was no mass start but one by one you dibbed your electronic key to register your start time and then jogged off across the head of the dam.

I soon started chatting with a fellow competitor, Carl, who became one of a number of runners who I ran with for periods throughout the race. Carl, I found, like the majority of the other runners I spoke to had done a significant more course recceing than me. This soon came in pretty handy as he led a small group across the first peat bog top and dropped us out of the clouds at the reservoir under Pen Y Fan exactly on course.

The course itself was a 56 mile (or 89 kilometres as it sounds better) circuit around pretty much all of the Beacons. Starting in the East at Talybont it skirted south of the busy Pen Y Fan range heading out West to the half way point at the popular and stunning Fan Brycheiniog then turning back eastwards through the deserted middle peaks before heading over Pen Y Fan and the amusingly titled Fan Y Big before heading back down to Tal y Bont reservoir.

After ten or so miles we hit the first checkpoint. Each one was staffed with mountain rescue and lots of brilliant enthusiastic volunteers. After dibbing my timer and filling up on water I took the chance to change into clean dry socks. As the rain had now stopped I looked forward to a few miles without soaking wet feet. Throwing away my mud soaked pair I headed off to the first of the ten peaks that gave the race its name. While the rain had stopped the sun had not quite managed to dry out this area of south Wales and my lovely dry feet lasted somewhere between 2 and 3 minutes – leading to my first sustained burst of foul language of the day.

The smooth descent off the next hill allowed a good mile of nice downhill running. As I reached a stream at the bottom I waved cheerily to a couple of campers only to then grab my calf muscle which had just cramped into a very strange shape. Cramping up less than a quarter of the way around was not a great portent. Switching to a tentative hobble and then slightly faster walk I set off up the next slope feeling a bit more nervous than I had on the way down.

The next section to checkpoint 3 and the promise of hot food was through a limestone area of the Beacons that I had never visited before but which was stunning and a change from the high peaks. On this section I had a chat with Karen who, in the V50 category, was to be first women home. At that stage she was having a little trouble with her legs but then as she pointed out she had come second in an international 110 mile mountain race only three weeks before this was to be expected…. I nodded understandingly!

Reaching checkpoint 3 the enthusiasm of the marshals had manifested in the decision to dress up as furry animals. It does make a change from a luminous yellow vest and to be fair if someone is handing me a bowl of chilli and cup of coffee I am not going to criticise their sartorial taste.

I met up with my parents and seven year old son Daniel at the base of the third peak of the day, Fan Brycheiniog. Being 30 miles in I had my first experience of an inevitable fatherhood milestone that I had hoped I could have deferred a few years, being beaten up a mountain by my son (the fact he kept telling me to hurry up did not make it any better). Peak 4 was an out and back so after ticking that off I was able to drop off Daniel with my dad who had by then reached peak 3.

Picking up with another group of runners we headed across to checkpoint 4 and some of the lesser known Brecon peaks. One of the group was an ex-para who had done a fair bit of hill bashing around here so again I benefited from local knowledge.

For the next 10 miles or so, some absolutely beautiful scenery and lovely early autumn weather had to compensate for growing aches, pains and general why the **** am I doing this again. I think the former just about won the battle between the competing emotions but it did come a bit close at times.

After what seemed like an interminable slog we reached the last checkpoint of the day and more importantly the burger van. I’d caught up with James a guy from Edinburgh who I’d run/walked with earlier in the day and we set off together to tackle the final section – up Pen Y Fan, Cribyn and home. Reaching the top of peak 8 and the high point of the race the view west caught both the setting sun and the hills we’d come from over the course of the afternoon.

I managed to make the last peak before turning on my head torch and with this on the run became a lot more intimate as the range of vision was down to the 30 metres or so lit up by my headtorch. James had forged ahead to try and catch up with his wife who was attempting the “short” course and I therefore ran the last bit with Elenud who was eventually 2nd woman home. Again my preparation or lack of it was shown up by my latest companion who had travelled by public transport to run this last section 8 times in order to get it right on the day (fortunately she did).

A very painful and slippery descent led after 17 hours to the Tal-y-bont dam and for the first time in hours I broke into a run as opposed to the walk/bandy legged shuffle run I had had to make do with all day. Crossing the line I dibbed in for the final time. Finish time, quarter past ten – last orders in Talybont village was still do-able….

Weekend Recap: That Weekend When Everybody Runs
Scroll to top