A traditional winter warmer of an off-road race saw a welcome return to running for Dave Monk. The Coombe 8 is organised by Sphinx AC, and as the only K&D runner this year Dave Monk has the distinction of being first runner home. Dave ran 1:25:30 for 8 miles on the trails. Results Here 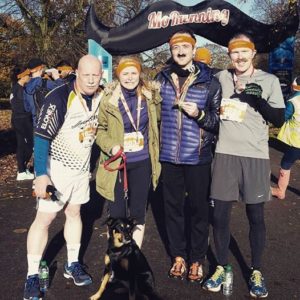 Kate Marsh and Darren John joined their friends and enjoyed a little silliness with moustaches and plenty of other runners in fancy dress at Mo Run in Birmingham’s Sutton Park.

Darren John finished second despite being sent an extra 1.3km due to a marshall moving position and then instructing a number of runners to run past the cone. This was instead of the actual instruction which should have been “run round the cone”. A number of the 5k participants ended up gatecrashing a field full of orienteerers. Darren ran 45:52 for the 11.3km.

Kate Marsh, having been full of lurgy all week took it comfortably and ran without a watch. Enjoying her morning and running 1:00:02. 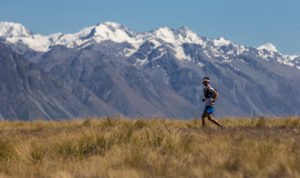 Jez Bragg runs in the Two Tumbs Range during his 50 days traverse of the Te Araroa trail in New Zeland on January 22th 2013.

Having recently played host to one of the UK’s top female runners Katrina Wootton, Brueton appears to have attracted another top class athlete this Saturday. Jez Bragg finished 2nd at Brueton. He is better known as a legend of ultra-running. Jez’s resume includes running the length of New Zealand (3,054km) in 53 days. He’s also won prestigious races including The North Face Ultra Trail du Mont Blanc (2010). His full profile put together by his sponsors can be seen here: Jez Bragg: The North Face Profile.

Ian Maidment ran 25:59, dipping for the line there, at Coventry’s War Memorial park.

Big Dave Carbutt ran a swift 19:19 up in Nottingham to take second place.

Conwyn takes place on an RSPB Nature Reserve at Llandudno Junction in Conwyn. I’ll resist nicknaming Frances Ramsden ‘Twitcher’ but congratulate her on a 32:09 run.