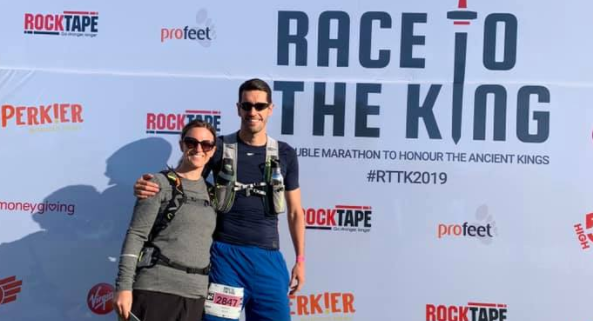 Race to The King:
In his own words: “It started in 2016 entering Race to the Stones (100km on the Chilterns) for a fantastic charity and raising over £6000. Me being me I went back to that race in 2017 due to unfinished business. I then did Race to the Tower last year (52 miles on the Cotswolds) and finally yesterday I competed the series running 53.8 miles with 5,600 ft of climbs in Race to the King (on the South Downs) in 8 hours 57 mins as a 40th birthday present.

Fantastic day out yesterday in the heat and, as ever, challenging my sanity and perseverance at numerous times. Yesterday was special as I was able to share the start with Rachel Thorley (who is out there today finishing Race to the King herself). About 230 miles and 20,000 ft of climbs for those medals.

I made so many new friends during all the races and met some fantastic people. If you’ve never pushed yourself to do a long run just try (doing whatever means “long” to you) – it’s inspirational the variety of people that do these and such a great way to realise the inner strength you have. (Motivational bit over).

Wythall and Hollywood 10k:
The strongest K&D line up in W&H10k history toed the line as they showed support to this great local 10k.

Rob Michaelson-Yeates (34:41) and Jane Evans (38:03) led the men and women home as K&D swamped the field with quality performances.

Brueton parkrun:
Nick Woolley lay down a stunning run to ever so narrowly miss out on a sub-17 Brueton clocking. Nick who’s excelled over summer ran 17:00 for a course PB. He nipped Gareth Wainwright who clocked 17:16 and Chris Morgan enjoyed a fine stretch of his legs in 18:32.

Arrow Valley parkrun:
Two Edwards’ and an Austin were doing the two laps round the lake as Pete ran 21:34 and Caroline and Graham both clocked 29:35.

Torbay Veloparkrun:
Darren John recovered slightly from his recent health and injury wobbles to run a course PB of 18:32, his thunder was stolen by his father David John though who ran a massive PB of 29:26. Knocking his PB down from last week’s 29:59.

Sandwell Valley parkrun:
Kevin Tomkinson popped over to the hills of Sandwell and enjoyed a 29:00 pootle.

Holkham parkrun:
Ainsley Wainwright got his nobbly knees out at Holkham to run 19:19.

Stratford-Upon-Avon parkrun:
Fast and Flat suited Victoria Cook on Satuday as she stormed round Stratford in 25:37.

Hafan Pwllheli parkrun:
Tim Price took to his homeland to storm round in 18:30.