#IAmTeamGB saw the biggest ever sports day this weekend just gone. Bumper numbers of parkrunners, Olympians, free sporting activities and a big celebration of the three hundred thousand or so Gold medals we won at Rio 2016. Any excuse for the nation to have a knees up and a shindig. Of the 414 parkrunners at Brueton 26 were attached to our club. A grand old turn out.

Jonathan Randall was first across the line. Our Chairman, Dear Leader, Supreme Officer of the Grand Committee ran 18:52. Paul Williams ran 19:56 to follow him home. Felicity Sharp was first lady and third overall, in 20:19. A new PB that edges her ever closer to the magical twenty-minute mark. Third male home was Mike Durkin in 21:17. Jane Hunt ran 22:54 to be second woman home, followed by the push-up princess (see her facebook for an explanation) Kathy Bailey. Kathy ran 23:14; aided by her twenty-two push ups a day.

Christopher Taylor ran a PB of 23:47 an eleven second improvement on his previous best. He was joined in PB corner this week by Lynsey Drakeley in 29:40, nipping a second off her fastest time. Kay Adenipekun also set a new best time with 25:08. Throw in Flick and PB corner is a busy one this weekend.

Welcome also to Kate Marsh, a parkrun regular who has joined the K&D ranks and ran close to her PB on what was her first official run as a club member this weekend.

Having spent Monday in A&E getting xray’s on his hip Darren John hobbled down to Exeter Quay for a gentle parkrun hoping local hero Jo Pavey might pop by for #IAmTeamGB. She didn’t. She went to Killerton instead. D’oh! He did his best Quasimodo impression dragging his limp groin (no jokes please!) around the flat mixed terrain course in a gentle 22:03.

On the bright side he did see two novelty Rhinos on his way to parkrun. 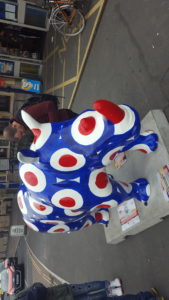 Poole parkrun keeps popping up in our Weekend Recap. A hotspot of a summer retreat for the finest of our Green and Gold gentlemen. Nigel Foster was the latest to represent. He ran 25:43.

Another popular one, thought a little closer to home than Poole, Simon Battson clocked 23:15 at the fast and flat Kingsbury Waterpark.

Dolgellau parkrun in Wales takes place on an old railway track, The Mawddach Trail is a cycle path route, part of Lôn Las Cymru, which runs for some 8 miles from Dolgellau to Morfa Mawddach railway station, by Barmouth bridge on the Cambrian coast. Pete Austin got in a good ‘train’ing session before Kenilworth Half last week. He showed it was ‘full steam ahead’ with a 21:06… As an aside 21:06 will probably be the time the 15:30 train to Birmingham New Street finally arrives at the local train station.