In the Big Apple, the city that never sleeps, home of Ross, Joey, Chandler, Rachel, Phoebe and Monica, our very own Gareth Wainwright clocked in a sharp 02:52:52 at the New York City Marathon. That grabbed him a top 500 finish; officially coming home in 422nd. 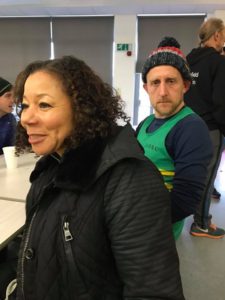 Centurions, our nearest rivals, aren’t all bad. They do have the Centurions GP series to keep us going through winter so we’ll cut them some slack. Race 1 was blisteringly fast, an Irish ringer dropping in while visiting the area on a trip and leading the race home in a stunning 25:34. Ooft.

Richard Dixon was first K&D male runner home in 29:52. Emma Donnelly took that honour for our ladies in 36:53. Congratulations to the ladies that took home three of the prizes available. Emma Donnelly, Jane Hunt and Kathy Bailey all getting the nod in the post-race ceremonies.

With local speedster Pete Brookes continuing his run of solid sub-16 first place finishes at Brueton parkrun (he makes it look so easy, but it’s great to watch… from way back) it was left to Darren John to be first K&D runner home in 3rd place. He recorded his highest finish in a while to run 18:46. A first Km of 3:26 meant the rest of the run was a grinding eighteen minutes and a bit. He was followed by Paul Williams whose performances continue to show strong consistency and is now officially a sub-20 natural. Third man for K&D was Andrew Connors. Not bad considering on the start line he said it was an effort just to get to parkrun.

Flick Sharp was first lady (was she with buggy this week?) running 22:28. Speedy if that also includes a child.  Flick just got the better of Kathy Bailey who ran 22:50 on the nose. Kerry Whitehill took the bronze in 24:43. Kerry is also the proud owner of a glittering new PB.

In PB corner this week she is joined by:

Siobhan Cotter joined the 50 club allowing her a VIP pass to Achievement Alcove.

Well done to Kerry, Jan and Siobhan. They’ll no doubt keep the door staff busy; but lads what’s going on? Letting the girls trounce you this week!

At War Memorial park in Coventry there was an appearance by Ian Maidment. He ran 25:16. We didn’t send him to Coventry for an indiscretion did we? Come back Ian. All is forgiven.

Down in Landarn Town Chris Quarmby laid siege to the capital with a 24:57.

First Men’s Team Captain Simon Bentley goes off to South America to become a bandito and now Stand-In Captain Tim Price has gone to Australia. I need a holiday. Can I become Stand-In, Stand-In Captain? It seems to be a job with travel perks. Knowing my luck I’ll get Bognor Regis though.

You won’t get prepared for freezing XC season swanning around in flip-flops and shorts in the Southern Hemisphere though y’know gents!

Nearer to home in Pembrokeshire Steve Marks ran 33:26. That’s more like it. The Great British Winter spent in the mountains is what real men embrace. None of this Southern Hemisphere-softie nonsense!

13 – Unlucky for Some? Reflections on Our First Half (Fiona Holland)