Little late 70’s, early 80’s reference for you there. It wasn’t all just Arden 9 running this weekend we had plenty of other runners out and about ‘enjoying’ the blistering heat. 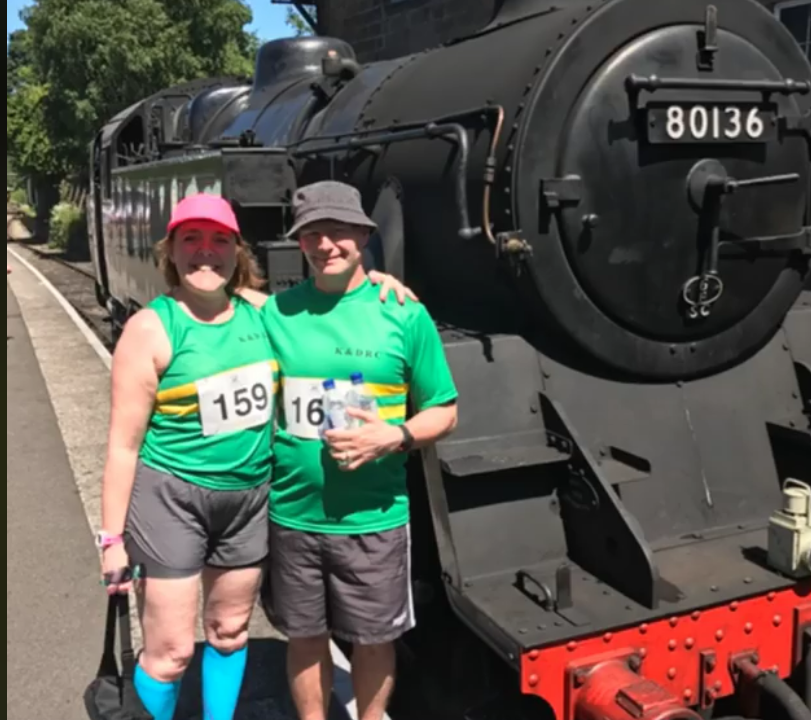 No, not some slang from Trainspotting about illicit drug use in Edinburgh in 1996 – in fact it is an 8.4 mile race up and down the fells in the North Yorks Moors. Last week our men raced a horse. This week Caroline and Graham Edwards raced a train. What’s next? Torsten races a Boeing?

Caroline and Graham didn’t run out of steam, or get carriage-d away. They kept chugging up the hills and stayed on track. Running on the Moors provides a great platform. I’m sure it’ll be just the ticket to new PB’s. Graham let Caroline have his seat in 2:01:31 while Graham took 2:08:32. No delays with them getting in.

Gary Wickett took on the Malvern Hills Half on Saturday in brutal conditions that saw many drop out. Not our Gazza though. He went up and down like a kangaroo on a pogo stick over the hills of Malvern. Then rocked up at the Arden 9 on Sunday.

With temperatures brutal even at nine in the morning parkrun was a tough effort this week. Especially with a nine mile road race the next day.

There were third and fouth place finishes overall for Gareth Wainwright (17:29) and Darren John (17:53) while third place for the men went to Michael Swann (19:02).

Run of the day award goes to the ever excellent Jane Evans. Jane ran 18:17, finished sixth overall, third K&D athlete, first women and broke the W40-W44 Brueton age group record by 9 seconds. Not a bad morning’s work. Louise Bell was second K&D lady in 23:24 and Emma Lowe eased herself round in 24:37.

Down in baking-stoke Steve McDonald showed he had toasty toes with a 19:09 run.

Lynsey Drakeley took in the sights of Redditch with a 30:32 parkrun time.

Presumably the hill is black because it has charred to cinders in this heat. Gary Welsh ran 22:58.

Burnham and Hotbridge parkrun gave Kerry Hobbis a warm welcome as she ran 28:35

Great running team… oh sod it. I’m too hot. I’m going for a lie down.

Thank You to our Arden 9 Sponsors