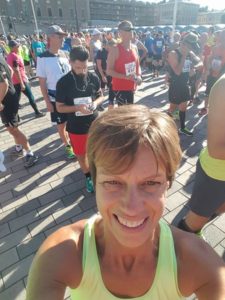 Kathy Bailey made it two years in a row that K&D have been represented in Stockholm for their annual Half. With 13,000 runners, beautiful backdrops with a Start/Finish line outside the royal palace and a slightly undulating course the Half is a popular autumnal race for those looking to take a foreign race in surroundings where 90% of the population look disgustingly healthy, 80% speak brilliant English and you can go to the ABBA Museum on your recovery day.

Our own Dancing Queen Kathy Bailey ran 1:53. No need to exclaim Mamma Mia, or S.O.S with a time like that. What a Super Trouper, representing K&D was the Name of the Game and, When All is Said and Done Kathy did it once again with aplomb.

The iconic Tyne bridge is a premier landmark in running, even if the local team are no longer a premier force in football. While Mo and Dathan battled it out at the front of the men’s race five of our own took park on Sunday. Among the 50,000+ finishers Steve McDonald ran 1:34:34, Ian Williams clocked 1:53:22, Stacey Morgan registered 1:59:33 and Kerry Hobbs crossed the line in 2:04:01. Anthony Dutton, who’s recently applied to be a member of K&D crossed the line in 1:29:01.

Over at the home of the Bard it was ladies day at the Stratford Big 10k. The event featured three representatives. Emma Donnelly finished 9th Sen Female overall in 46:58, a Seasons Best for Emma. Second K&D lady home was Emma Robins in 1:04:05. While Lynsey Drakeley rounded out our representatives in 1:04:06. Having been pipped on the line by Emma Robins. Well done all three.

Stockholm is famously an archipelago consisting of 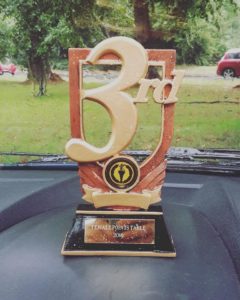 thousands of Islands and a lot of water. For a while there on Saturday morning there was a threat that similar levels of water might engulf the parkrun celebrations with Mayor Mike Robinson being washed out to sea. He had emerged from the Mayor Lair in Solihull to present the annual awards trophies. Congratulations to all winners, regardless of club. One of our newest members Kate Marsh was third in the annual ladies points competition.

Like many of us she found her way to the club through starting at parkrun; it has proved invaluable source of new members at all levels and long may that continue!

As for the running:

The top 3 men took up positions five, six and seven overall with Gareth Wainwright running 17:52. The last time his finish didn’t start with a 17 was way back on the 16th May 2015. Consistent. Even then he ran 18:00. Mountain Man Tim Price took a break at sea level to run 18:34, while former Chairman Richard Dixon ran 18:51.

For the ladies Sarah Cattell took the coveted first club spot. Showing good consistency in recent weeks she clocked 25:20. Kay Adenipekun clocked 25:46 for second while Kate Marsh took her second third of the day with 26:04, however as she is yet to change herself from Unattached to K&D on her parkrun profile we’re giving third to Jude Mansfield in 26:14. (#LifeIsToughKate)

Congratulations to Subhash Agarwalla who made his Brueton parkrun debut for the club setting himself a 32:03 PB in the process.

Summer is officially over as we only had one parkrun tourist this week with Mark Burgoyne running 20:04 over in Shrewsbury. With no runners doing parkruns in far flung locations around the countries sea-side resorts that can only mean one thing: XC is fast approaching.

Weekend Recap: The Maggs-nificent, Running parkrun & The Hills of Kenilworth...