Race to the Stones: 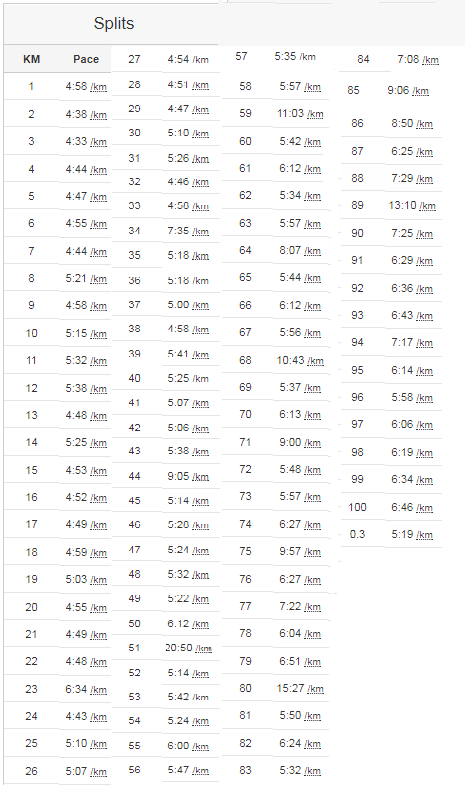 ‘Some Might Say’ that 100km in the middle of July is a a mad idea. Not Chris Thorley, first of two mega Chris based performances this week.  Chris Thorley finished 35th in the annual Race to the Stones.

Chris took about 4 hours off his previous best. Finishing in an incredible 10 1/12 Hours. Utterly ridiciulous. You mad man. I’ve attached his splits for you to look at and laugh.

Special early mention for Brueton this week as Chris Morgan rounds out our Chris-palooza of great performances. Chris smashed his 5k PB with a stunning 16:51 at Brueton. The guys up front went out hard (a 5:10 first mile) and Chris dug in with Gareth Wainwright with our men going 16:51 and 16:54 for second and third overall. Behind them Darren John tried gamely to hold onto the coat tails before fading to 17:38.

For our women Jane Hunt took the crown on Saturday in the rain. The downpour didn’t dampen her run with a strong 22:52. Sally Anderson splashed in behind Jane in 25:43 and Kate Marsh made the ‘moist’ of the wet conditions to paddle home in 25:57.

Noteable achievements include a PB from Julie Sutton (29:20), Michael Swann and Caroline Edwards who both joined the 50 club, Graham Edwards who notched 100 parkruns and took the time to help a sick child and Max Gimson who made his K&D Brueton debut.

We don’t like to encourage those triathlete types too much. They’re an odd bunch. All lycra and speedo’s. But occasionally we have to congratulate them. Simon White took part in the Birmingham Triathlon and came in 11th overall and 3rd in his category. A fantastic result and hugely impressive return.

Down Bristol way Mary Heald saw in parkrun day with a 21:29 run.

A short journey up the road saw Ian Maidment wear his parkrunday best outfit and shine his trainers to run 29:08.

Stephen Evans was surprisingly allowed into the royal grounds of Leamington Spa to run 24:51.

The man they call Dobby, Richard Dixon clocked a smoooooth 18:46. Such a quick house elf.

First Royal Leamington Spa and now Henley-on-Thames. We’re so firmly only a stray dress code violation away from being kicked out all the fancy places. Fiona Holland looked perfectly at home near the Regatta running 33:25.

Killerton sounds much intimidating. Unless you’re scared of men in red trousers. Steve Marks showed his cajones by rocking up to Killerton and running 35:50. Killerton is also near  Stabberton and Murderatorn parkruns.