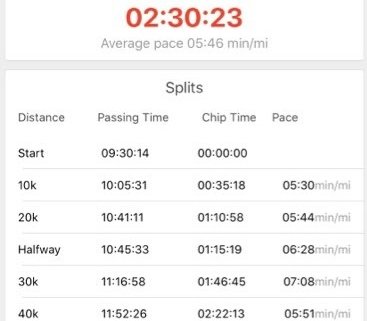 Yorkshire Marathon
It isn’t every day a club record gets taken down – especially one that was owned by Chris Sharp. So it is with the appropriate fanfare, fireworks and deference to the old record of 2:34:55 set by Chris in London 2016 that we declare there is a new K&D Men’s Marathon Club Record.

A scintillating run by Rob Michaelson-Yeates, running for the national England Age-Group representative team claimed the title in an astonishing 2:30:23. Yes, that is correct. Two Hours, Thirty Minutes and Twenty-Three Seconds. It leaves us dizzy just trying to comprehend that Rob ran an entire marathon where every single mile was under six-minutes. An average pace of 3:32/km (that’s c.17:40-45 parkrun pace). Rob’s run puts him in the top-140 in the UK this year.

Commiserations to Chris Sharp who’s record stood for a super three-year spell. Testament to his qualities as Men’s Captain that he was one of the first to congratulate Rob on his stunning success.

Running a new Brueton best and just missing her all time PB set at Stratford was Flick Sharp who ran a superb 19:10. Considering Stratford is considerably faster than Brueton that puts Flick in a great position to build towards a sub-19. Rosie Marsh continued her journey back to full fitness shaving a second from her post-layoff best. Running 21:45. On the trend of come-backs Kerry Ann Thompson continues to get quicker with a smart 22:20.

While Gareth Wainwright’s outright PB and Flick’s course best stole the headlines Carly Mitchell joined in the PB party with a 30:04. A sub-30 clocking now looking possible. Sandra Boot continued her impressive run of PB’s as she ran 26:23.

Congratulations to Manjit Uppal who ran her 100th parkrun.

Chairman Darren isn’t a particular fan of horse racing but parkrun HQ is the golf centre set in the racecourse grounds, less horses die playing Golf which makes it better for his conscience. The fast course involved a double hill but an 18:01 show’s the course is one for a good time.

Torbay Veloparkrun:
David John lowered his life time best to a sub-29 for the very first time running a PB of 28:46.

Christmas Quiz III: Revenge of the Quizmaster
Scroll to top