Dozens of K&D’s finest members turned out in Worcester over the weekend. As well as being huge fans of the sauce with their cheese on toast they represented the club in the finest of fashions at the Worcester 10k.

Kay Adenipekun took the Golden Knowle as our first man home finishing in 49:33. For the women one Golden Dorridge was well earned by Claire Maggs who was first K&D lady across the line in 55:48 – but also by Elizabeth Williams who ran 55:44 to just take the title on chip…. Untile Jan Hornby did exactly the same thing to Claire and Liz! Jan ran 55:42 on the chip. Stonking! Sod it. Trophies all round.

Special congratulations to Sarah and Wendy who made their debut’s at 10k! Always a massive achievement.

Darryl Wilkes took the longer of two options in booking himself onto the Worcester Half instead of the 10k. His time was a very respectable 1:50:34. Just reward for being on his lonesome! 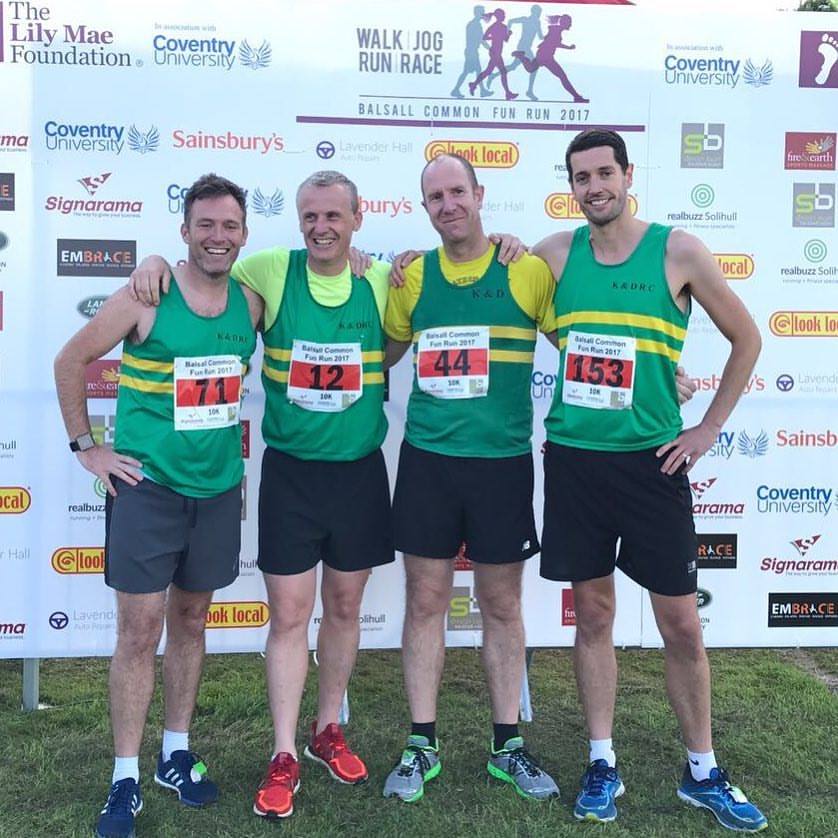 A team victory for our K&D Guys in the Balsall Common RC back yard. Careful now ladies, It’s like Take That in their prime. Chris Thorley took the overall win in 37:39. Rob Houlston was in 8th timed at 40:54, Russell Davies 9th running 41:24 and Richard Beale rounded out the team in 42:30 and securing the title of overall knobbly knees winners 2017.

In perfect parkrun conditions Gareth Wainwright snipped under the 17:00 barrier with a 16:56. Just behind him Darren John equalled his Brueton PB, missing out on an all-time parkrun pb by just 2 seconds. 17:15 the unlucky number for him. Behind them, and ahead of Rugby 10 Mile on Sunday Paul Williams ran 19:41 – being chased down by Ed Long of the club.

Our women were just as competitive with Siobhan Cotter finishing 2nd lady overall in 22:25 followed by Louise Bell in 23:57 and Kate Marsh in 24:58 on her 99th parkrun. There was a PB for Smita Deshpande in 28:21 too. Congratulations!

And a special welcome back to Steve Evans who did his first parkrun since falling off Snowdon and giving us all a scare and a laugh. Mostly in that order.

Wythall parkrun:
Wythall celebrated its inagrual parkrun. A Three lapper it adds to the local parkrun lanscape. Three of our troops inspected the course with Paul Stead setting the initial K&D Course Record in 21:55 (The full course record after 1 week stands at a tempting 18:16). Gary Welsh ran close to Paul in 23:01 with Keith Whitehead only a smidge behind in 24:45.

Long Eaton parkrun:
Why did Chris Quarmby feel ill after his parkrun? He’d not Long Eaton… here all week folks. Chris ran 26:00 and his delightful other half Jane Quarmby ran 30:31.

Maybe he ate too much Quarmb-eef? Corn Beef? Geddit?

What is it with K&D runners and Dolgellau? Did I miss the memo? Greg Turner missed 2 months travelling, then he’s off again. Fair enough. 21:52.

Hurry and Curry – Fri 20th Oct Jemma Phelps: Tri-ing her hand at Triathlon for an Important Cause
Scroll to top