Cross Country Running.  Its like Marmite.  You either love it or you hate it.  And if you love it, you can’t get enough of it.  But if you hate it, well, you’re just a bit weird really.  If you love it (if you’re not a bit weird) this post is most definitely for you.  If not, why not give it a try.  Your taste buds might just have matured!

The second of this season’s XC league races was held at Cofton Park on Saturday 5th December.  The weather was almost perfect for XC running except for some rather strong winds that blew everyones club flag down and very early blew Captain Si off his feet (he’s been on a diet so is super light now…or so he claims!).

The ladies took to the field first at 13:30 and were led home to 10th overall in the Masters Women’s league by Monica Green.

Our expanding mens team went of at 14:30 and with some super performances throughout both A and B teams took won the day.  The A Team being led home by Chris Sharp in 9th and the B team by Chris Morgan in 44th.  The A team also claimed top spot in the league overall cementing their push for promotion this season. 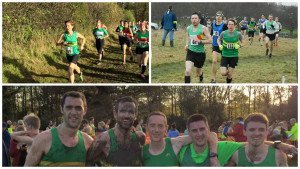 A massive thanks and congratulations to everyone who took part in the race.

Now look at that picture.  Look how happy everyone is.

They definitely love cross country.  And marmite, most probably.

The next league race for both men and women will be held on Saturday 16th January at the slightly worryingly named Crypt School.  Details of the course and directions to the school can be found on the Birmingham and District XC League website.

The XC also season has 3 championship races that your might be interested in.  Details of these races is below.  If you’re interested in taking part in any of these please email your club captain so they can get you entered.  The club will pay your entry fee for these races and only asks that you refund this if you do not then run.

Warwickshire County Championships – The 2016 race will be held at Warley Woods in Smethwick on Saturday 9th January and will include races for all junior age groups.  The deadline for entry is Wednesday 16th December.  More info can be found under Championships at www.warwickshirecountyaa.co.uk

National Championships – These are the pinnacle of the XC season each year and include senior races of many many runners from across the country. The 2016 race will be held at Donnington Park on Saturday 27th February.  Further details are yet to be confirmed.

If you are interested in running in any of these championships please let your club captain know so they can ensure the club enters you.

One last thing, a reminder that the club holds XC training every Saturday morning at Cofton Park.  The training involves running up and down lots of hills, with the occasion rest, and is a great strength workout.  it is also lots of fun (no, really it i!).  For any of you who are interested we meet at 8:30 in the car park and the session lasts for approximately 1 hour.  How else would you want to spend your Saturday morning?